In the previous chapter of this series, I had introduced how program execution could be allocated to a Nvidia Graphics Device using the CUDA dev kit library. In this iteration, I will give a more in-depth explanation of the CUDA thread hierarchy. Understanding the thread hierarchy will allow the programmer to maximize efficiency when architecting the execution distribution to a CUDA device.

A thread is a singular context of instruction execution and is the most basic unit of the CUDA thread hierarchy. In terms of purpose, a CUDA thread is no different than a traditional processor thread.

A grid is a collection of thread blocks. Thread blocks can be organized as 1 or 2 dimensions within a grid. As of the time that this post was authored, a grid can have a maximum of 65535 thread blocks in each dimension.

Thread blocks within a grid execute independently of each other with the assumption that there will be no guaranteed order of their execution since that is determined at run-time. This is a contributor to NVCCs automatic scalability across hardware variances of different Nvidia CUDA devices. This will become more evident down below in the hierarchy to hardware translation.

Figure 4. Grid of Thread Blocks from the Nvidia CUDA Tool Kit Documentation showing the relation of Grids, Thread Blocks and Threads is below: 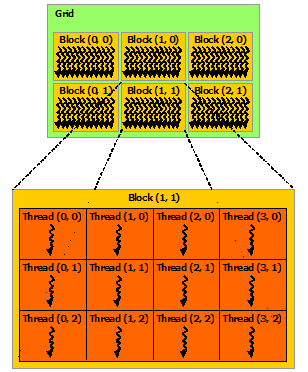 A Nvidia CUDA GPU is composed of several CUDA streaming multiprocessors (SM). An SM can be thought of as a processing unit which contains multiple cores, like how an ordinary desktop CPU will contain a specified number of cores. However, the cores that are contained within an SM are known as CUDA cores. Like a CPU core, CUDA cores can host multiple threads, but a CUDA core on its own will have less processing capability than a CPU core. Due to this difference, the SM will achieve its power through a much greater number of CUDA Cores. These SMs work in-parallel as a collective and are what determine the capabilities of the host GPU.

Below is a simple illustration of a CUDA GPU with 4 SMs, with each having 4 cores for a total of 16 CUDA Cores: 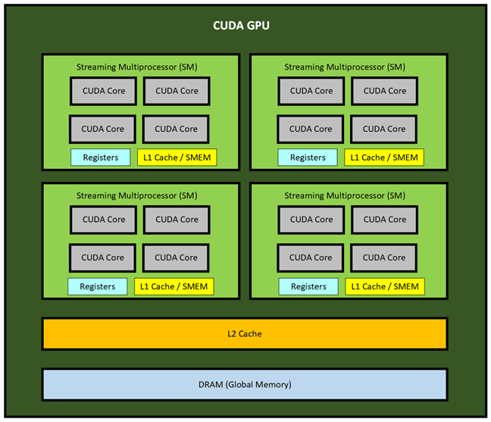 If you remember from the last chapter of this series, we had called our revised matrixAddition() function to execute as a kernel on the GPU:

When invoking a kernel, it is required to specify the amount of thread blocks and the number of threads per block which will execute the kernel-specified routine. Above, we specified the kernel grid <<< # thread blocks, # threads / block >>> where:

amount of threads per block = col_num= 3

since we were adding two 3x3 matrices.

This means that when we invoked the matrixAddition kernel from above, a grid of 3 thread blocks, each with 3 threads, was assigned to the GPU. Since each thread block gets its own SM, 3 SMs were active, and since there were 3 threads within each block, 3 cores within each of the 3 SMs were concurrently executing the routine specified in matrixAddition. Invoking cudaDeviceSynchronize() then allowed the program to wait for all cores within each SM to finish and synchronize before moving on to the last part of the code where we printed the result.

Below is a simple diagram which illustrates how the matrixAddition Kernel Grid executed the routine on the GPU, where the active SMs and CUDA Cores are outlined in red:

Multiple kernels can be run on a CUDA GPU at the same time. Each thread within the active CUDA core will then concurrently execute each kernel-specified routine assigned to it.

I hope this blog post has been helpful in providing a more in-depth explanation of the thread hierarchy as well as how a program will get distributed to a target CUDA device. Understanding the thread hierarchy is foundational in creating properly load-balanced applications that run efficiently on a CUDA GPU. In the next chapter of this series, I will go over the memory hierarchy.

Customer Experience means everything to us, Here's Why...
Comparing different methods to get the 50th Fibonacci number in C++

Making a schedule from a blank set of rows and columns can be tricky. It’s tough to [..]