Michael Scott is a master of misunderstanding. Although he’s probably not someone I would ever look to as an example of exceptional leadership, the juxtaposition of his ineptitude with his position as Regional Manager is a tremendous source of comedy for me. Through Michael, The Office manages to capture a panoply of work-culture travesties, almost all of which boils down to having the right idea coupled with an impressive lack of tact – for example, promoting workplace diversity is a good thing. Still, a teambuilding exercise that relies on racial stereotypes is probably not the way to accomplish it.

The Office is an excellent case study of what company culture should not be; on top of that, it’s a wildly successful production due to a phenomenon that psychologists have dubbed the “It’s funny because it’s true”-principle. At Erdos Miller, we desperately want to break from the all-too-common workplace culture that gave The Office its wings. With that in mind, buckle your seatbelts for a two-part blog post where Part 1 will make the connection between core values and culture and Part 2 will reinforce how to get from a list of values to shaping culture.

Developing company culture is a challenging task. There is not a one-size-fits-all formula to accomplish this; fortunately, however, there are some well-established guidelines that we can lean on to shape our culture. It’s kind of like cooking Ossobuco for a very normal dinner party: Ossobuco will have an animal shank, braised with vegetables, broth, and spices; however, the details on what kind of animal shank, vegetables, broth, and spices may be slightly different from one recipe to the next.

The Core Values are the shank in my Ossobuco analogy. Different companies may choose different core values than one another, but those differences aren’t nearly as important as whether they exist or not – you can use sheepshank or beef shank, but, without a shank, all you have is braised vegetables and our Charades-included dinner party needs something more than just vegetable vibes.

The Core Values are a way of defining the company culture by providing a framework for the types of behaviors that bring life to the workplace. Without Core Values, each person within an organization will lean on their own values to drive how they interact with others. Allowing people to lean on their individual values is not necessarily a bad thing, however, the purpose of company Core Values is to help fill in the gaps between the differences in individual values.

Jennell Evans, too, alludes to our tendency as people to rely on our own values in the absence of clearly defined Core Values. In her article, “Core Values: Wall Posters or Culture Builders?” she continues by specifying four areas where company Core Values help:

At Erdos Miller, we have four Core Values:

Defining the Core Values is a good start, but they’re not very impactful if they only exist on a webpage. Evans’s article makes a strong case for adopting Core Values and then concludes by discussing how to make the values “come alive” – how to season and braise the shank. Part 2 of this blog post will take some of those concepts and see what they look like on the Erdos Miller Core Values. Until then, I’ll be standing in my living room, watching my plasma screen TV.

I love seeing new technology and new solutions to problems in Oil and Gas. I am down-right... 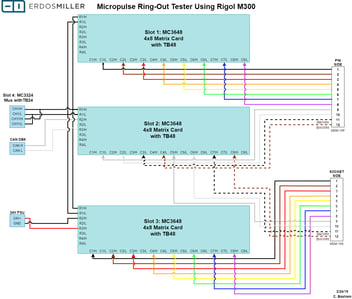 The SCPI Command Interface: Ring Out Testing with the RIGOL M300

What is the SCPI Protocol?

Released by Hewlett Packard in 1990, Standard Commands for Programmable...