IIn part 3 of this series, I will be introducing the NVCC CUDA Memory Hierarchy, and describing each component’s function during kernel execution on the GPU. The structure of the Memory hierarchy is the same and works similarly across all Compute Capability versions of Nvidia hardware, however, the specification of its implementation varies. Additional explanations can be found in sections 2.3 – Memory Hierarchy, 5.3.2 – Device Memory Accesses, or Section K for Compute Capability specifics in the CUDA Toolkit Documentation.

A sample of GeForce GPUs and their Compute Capabilities from https://developer.nvidia.com/cuda-gpus are listed below: 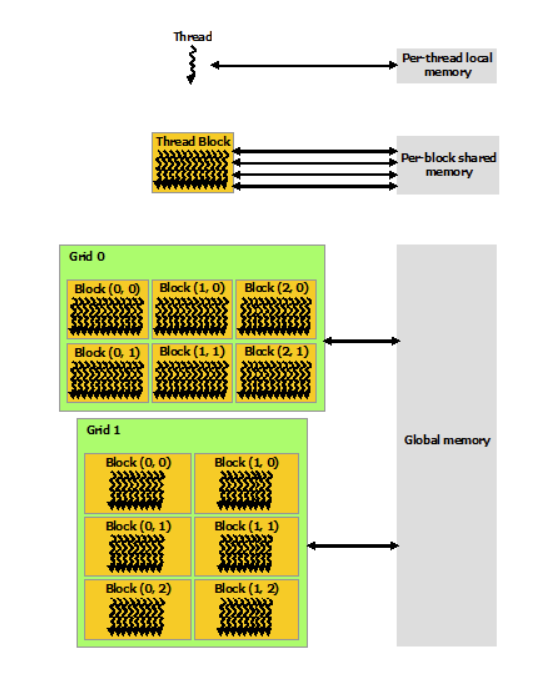 Automatic variables that the compiler is most likely to allocate to local memory are: Arrays which are not found to be accessed in a consistent quantity, any structure which is too large to be stored in register memory, or if the executing kernel uses more registers than available.

Shared memory is a segment of memory allocated to a block of threads and shares a lifespan with its thread block. Each thread within the block has read and write access to the block’s shared memory space. A block’s shared memory region is not accessible to threads outside of its corresponding block. Shared memory has a larger bandwidth than global or local memory, and accesses to it can be performed much faster. Due to how higher performance is achieved with banking, it is important that accesses made to shared memory adhere to specifications of the target’s Compute Capability. If ignored, latency speed may be penalized due to bank conflicts between requests. Compute Capability specifications are described in Section K of the CUDA Toolkit Documentation.

Global Memory within the GPU device is read and write accessible to every thread across all executing grids and thread blocks within. The Global Memory’s lifespan lasts the entirety of the CUDA context in which it was created. This memory can only be accessed 32, 64 or 128 bytes at a time. Read or write accesses to global memory must also be aligned to their size where the targeted address is a multiple of the transaction amount. To maximize global memory throughput, it is recommended that accesses are consistent with the global memory specifications of the target’s Compute capability.

Three Things I Wish I Knew Before Going into this Industry

Nathan's Advice transitioning from college to the O&G Industry

In my previous blog, we took a look at how to implement OAuth2 in LabVIEW. OAuth2 has an easy...