A couple months ago, I wrote the second in a series of posts on an introduction to PCB Design and Manufacturing: In that post, I covered the basics of schematic design by going through the design process for a simple LED circuit.

After the schematic has been designed and reviewed, the next step in the PCB Design and Manufacturing process can begin: PCB Layout. Personally, PCB layout is my favorite part of the process.

In Altium, each component has a schematic symbol (what we discussed in the previous post) as well as what’s known as a “Footprint.” The footprint is the representation of the physical part as it would sit on the printed circuit board. Take our LED as an example: The LED component is shown in Figure 1

You can see on the bottom side of the LED, there are two, gold-colored terminals that correspond to the two pins of our LED schematic symbol. To physically connect our LED in our PCB circuit, our PCB will need two pads of exposed copper that the terminals of the LED can be soldered to. An example of what this might look like in Altium is shown in Figure 2. 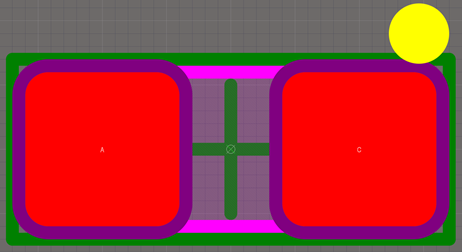 The footprint has multiple layers and each layer contains information pertaining to different attributes of the physical part:

The LED in our example is an 0805 package – if I later decided that I wanted to use an LED with a different color, I could easily just find another 0805 LED and make the substitution (I might have to update the value of my current-limiting resistor, but, since a resistor like that would have a standard package, that would also be an easy substitution to make).

With the schematic completed, we can update our project and push all the components specified in the schematic into our PCB Document. Figure 3 is the first thing we see after pushing our circuit to the PCB document: The components of our LED circuit can be seen on the right and the PCB itself is on the left (the particular shape of the board shown in Figure 3 is just a remnant from a previous project).

Taking a closer look at our components (Figure 4), notice the thin lines connecting the pads of the components. These airwires, or ratsnest, show the logical connections that are defined in our schematic. The airwires will be critical in assisting how we place our components on the PCB such that our wired connections flow efficiently. 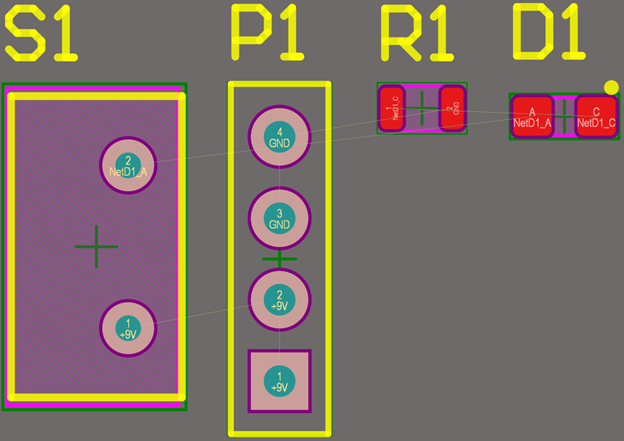 Before we begin making any connections (or, routing), we need to position the components on the board. Arguably, the majority of PCB layout is spent placing the components in a way that makes the routing process easiest – if the component placement is good, the routing should be quick and painless!

Switching back to the 2D Layout view, the components can be placed with the help of the airwires; Figure 6 shows how the components have been placed in a way where the airwires follow a simple square pattern, from P1:Pin 1 to S1:Pin 1; then from S1:Pin 2 to D1:Pin A, etc. 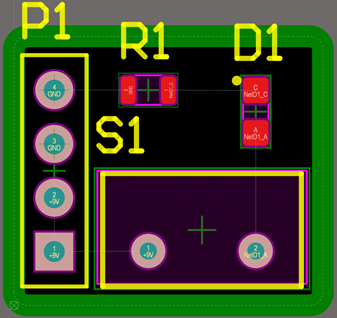 With the components positioned on the PCB, Altium’s interactive routing mode can then be used to define how copper traces connect the pins; the airwires disappear as each connection is routed; the left image in Figure 7 shows how the interactive routing uses the airwires to assist the designer in placing copper traces between pads and the right image in Figure 7 shows the completed routing of the board. 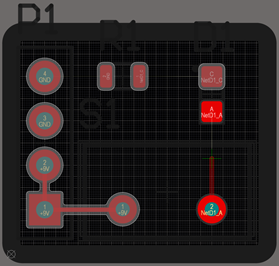 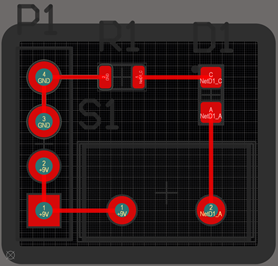 With the routing complete, the PCB just needs to be cleaned up and prepared for a design review. Since this design is so simple, this task will only involve resizing and repositioning the silkscreen designators.

Remember how I mentioned that Altium allows for a component’s 3D model to be embedded? Figure 8 shows the 3D models in action when I switch to Altium’s 3D View of the completed board. It’s looking pretty pretty pretty good. 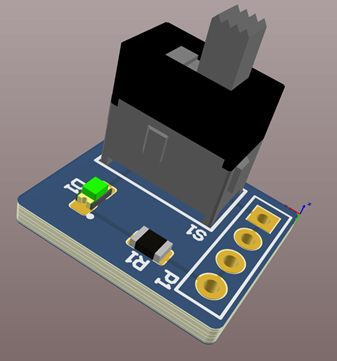 There’s a whole lot of stuff that I did not cover due to “I don’t want, nor am I qualified, to write an entire novel on this topic.” Keep in mind that the purpose of this blog post is to give a very basic introduction to the world of PCB design. To that effect, I opted to not discuss several key concepts, such as board stackup, vias, copper pours and planes, how to select appropriate trace widths, running the Design Rule Check, and the list goes on.

As a matter of fact, I didn’t even cover what a design review for a board layout would look like…it probably would have caught the fact that I didn’t add any silkscreen labels for the connector that would have made it abundantly clear on how power needs to be connected. The design review would have also probably scored a round of high-fives when the silkscreen ROFLCOPTER that I added to the bottom side of board was discovered. 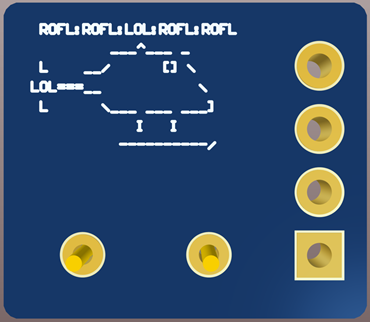 The next blog post in this series will be the final post of the series: It’ll cover the basics getting a board manufactured! Until then, I’ll PCB you later!

Making a calculator with Pyside
Chaos Testing: Your Software is Broken

Making a schedule from a blank set of rows and columns can be tricky. It’s tough to [..]